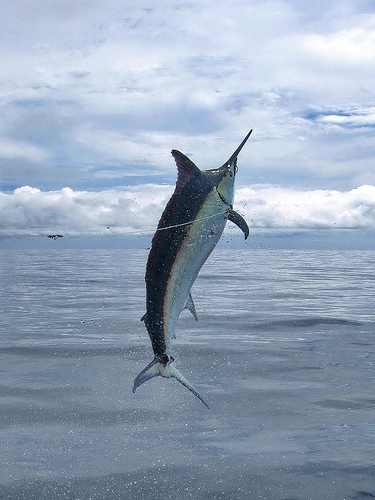 The Billfish Report is counting down the top billfisheries of 2009 – and coming in at #6 is Panama.

There’s no fishery in earth that’s better named than Panama – it literally means “place of abundant fish.”  And if there’s one overriding characteristic of Panama, it is precisely that: waters teeming with life, and plenty of billfish feeding on it.   Every species of Pacific billfish is found in Panama – with huge numbers of sails and blues.  Striped marlin show up in Panama, and the odd swordfish is also seen in Panamanian waters.  And the black marlin are positively prolific: while they don’t reach the size of the Australian blacks, the season is year-round – the only consistent and year-round black marlin fishery on the planet – and the fish are numerous.

2009 was another terrific season in Panama.  Huge numbers of black marlin were seen in the peak season – December through March – and a good blue marlin bite this year was punctuated by the typically inexhaustible supply of sailfish.

Here are some highlights from Panama’s terrific year:

–          The late January black marlin bite off Pinas Bay.  95 black marlin caught by the Tropic Star fleet – with quite a few larger (500+) girls in the mix.  Black bite continued throughout the season and has started December with some good numbers and size as well.

–          Some huge fish seen this year.  Tropic Star saw a couple of blues around the 800 mark in August – which is quite large for Panama…and Panama Sportfishing and Tropic Star both seeing blacks up to 800+ as well.

–          That typical sailfish bite. Everyone in Panama saw it – and it was particularly awesome in May.  Boats were seeing as many as 50 a day, and fleets could see hundreds of sails a week, rivaling Costa and Guatemala for the incredible numbers of sails a boat could see on a given day.

Blacks in abundance, blues offering some variety, some stripeys mixed in, and sails almost too numerous…all par for the course for Panama.

So Panama is the Billfish Report’s #6 Billfishery of the Year.  Stay tuned for #5, coming later this week.  Merry Christmas!