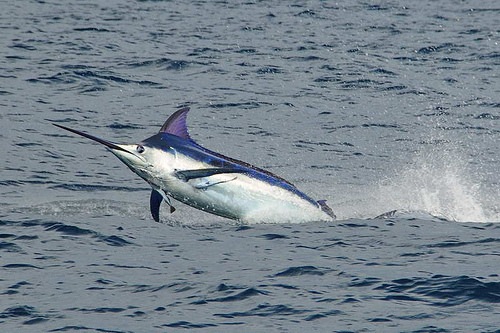 Over the course of the last month the Billfish Report has counted down its top 10 Billfisheries of 2010.  Last year we did the same – and the top billfishery of 2009 was the Great Barrier Reef in Australia, with some 40 granders caught in its 10-week season.

This year GBR came in at #2, with another phenomenal season, but one fishery had a year that eclipsed Australia’s…Panama.  Always world-class, consistently excellent, this fishery went off over several periods in 2010 – and exceled on all three measures that we analyzed for our rankings.

– Size of fish.  Panama usually doesn’t see fish pushing the mark, and this year was no exception.  But the absurd numbers of fish in the 400-600 pound range made this a big-fish fishery this year in many regards…with fish as large as 800 seen in Panamanian waters.

– Consistency of bite/numbers of fish.  Panama never really had a slow bite this year – the bite continued strong throughout its virtually year-round season.  And the numbers were stunning – boats had days with four, five, six marlin…and that’s not even speaking to sailfish, which can be found in abundance in Panama virtually year-round.

– Variety of fish.  No fishery on earth sees the same kind of mix of blues and blacks that Panama does – on a daily basis boats can see either, or several of both.  Add to that the striped marlin bite, occasional swords, and of course the numerous sails and you really don’t see variety like this anywhere else.

A phenomenal year for Panama this year – and already a great start to 2011 to boot – has left this incredible fishery atop our 2010 rankings.  Congratulations!