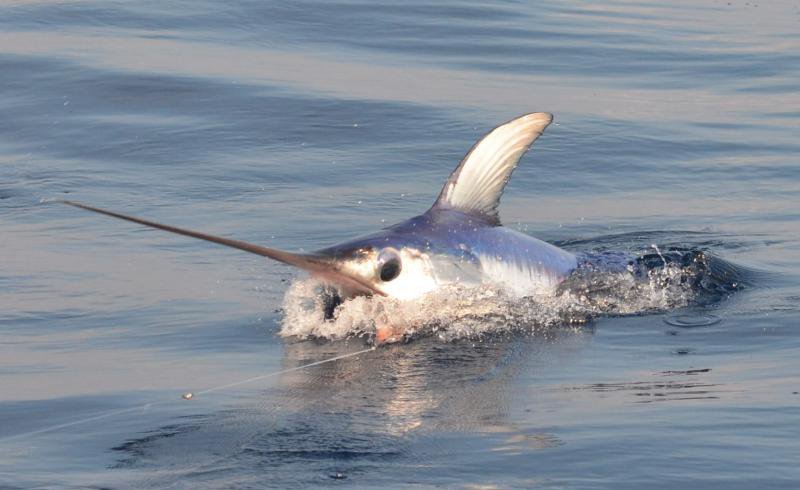 Surfside Beach, Texas – If you ask us the one place to go in the world to catch a sword, we would tell you without question, South Florida. We may however have to start re-thinking our answer given the great swordfishery off of Texas. We get quite a few reports from boats fishing off Texas who have managed to land a few swords, but without question, the guys that are leading the charge are on the Booby Trap. This 52′ Viking is captained by Jeff Wilson (a native Floridian) who has clearly brought his swordfishing talents from South Florida to the Lone Star State.

Given the run off Texas to deep water, one has to wonder how great this fishery could really be if more boats were fishing. For such a large state and for being Texans, you would think all we would hear about is how great the entire billfishery is. But, in reality a lot of Texas boats must be spending most of their time running out to he ledge and keeping their mouths shut.So, leave it to the Billfish Report to try and ask nicely about the numbers these guys are producing, so get ready.

With the long run we were talking about, Capt. Jeff generally sets a trip up for at least 3-5 days to maximize his time fishing, He gives all the credit to the owner of the boat, saying it is his passion that allows him to fish. The passion is pretty obvious when the guys decided to set a goal of 100 Billfish for the summer season, of which they have caught 70 thus far.

We are not going to chronicle every billfish they have caught, but here are some of their most recent trip numbers. These are not including all the countless tuna, wahoo and dolphin.

What may be even more remarkable to some of our readers is that Capt. Jeff releases most of his swordfish. So, let the debate begin on the best swordfishery in the world, but don’t count out the Booby Trap off the Texas Coast.