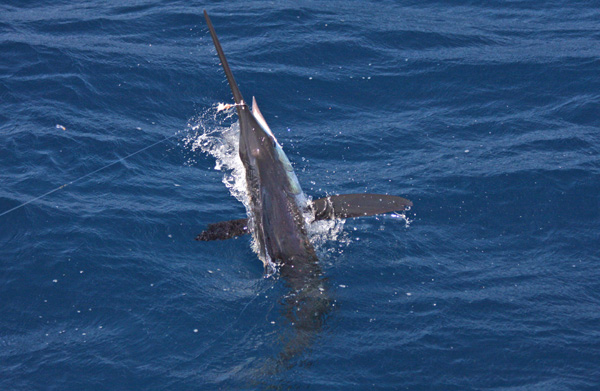 There  is no debate about it, billfish (and for that matter all fish) that are left in the water are better off. Their bodies and organs are made to be held in water,  not while being thrown up on the back of the boat. While we very much appreciate that many of these “transom trophy” fish are eventually released, it would be best for the fish and the crew to leave them in their natural habitats.

While it is best to release them while in the water, we will readily admit releasing them period is 100% better than the alternative. Lifting them out of the water does not neccesarily kill the fish however, as many have been led to believe. Dr. John Graves at the Virginia Institute of Marine Science, who has extensively studied White Marlin, recently remarked to us that they are surprisingly resilient. From his most recent research in the summer of 2012, he believes from the satellite tag data that all of the fish that he removed from the water to take samples, etc. all lived. We can only assume that this applies to all billfish, but no real study has been done. Even with that data however, Dr. Graves stressed the importance of keeping the fish in the water for best results in survivability.

Many countries, including the U.S. have passed laws on the handling of these fish out of water, but like everything, policing those laws are almost impossible. But do we really need the laws? Shouldn’t we as good stewards of this great sport, take it upon ourselves to help preserve these fish? This is not for us to decide, but we put that out as a thought to all of our fellow billfishermen.