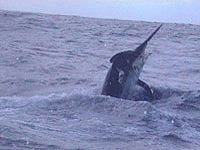 We have a late report from the great Australian Captain Brad Craft, who has sent us a photo of a fish he modestly called “1,000+.”  Fish was caught on Spur Reef on a small tuna, circle hook.  70 minutes of fight time, and the fish had some runs in her – one had her taking 250 yards of line with 55 pounds of drag…unusual for a large black for sure.

The tail measurements, however, make us really wonder about the size of this fish.  The butt of her tail measured 25″-26″ – typically 20″ is the clearance for a grander, and though there’s no telling how big this fish actually was, we could put a 1,300 on her and likely be quite safe…with a larger size certainly possible.  The size of her head did not compare to the massive girth – we’re trying to source more pictures now, though she never fully cleared the water.

The angler on this fish – Sam Mayer – made the noble call to release this huge fish in spite of its potential record size…she was tagged and released.

We’re not officially calling this the largest marlin caught this year, given that we don’t have a weight on the fish…but no marlin caught in 2010 was larger.  Congratulations to Capt Brad Craft on the Reelistic on this epic fish.