Some reports from Louisiana…

Though fishing on the east side of the Mississippi has been closed and is anticipated to be for a while, there’s still fishing going on off Louisiana, and even though there isn’t much billfishing happening we wanted to share some feedback from captains in the gulf off Louisiana…

– Capt. William Wall of Pelagic Charters reports a lot of clean open water for charters – charter fleet has been held in port by bad weather, not oil.  Better weather expected this week.

– Capt Mike Ellis indicating 85% of the spots they find tuna are open.

The Specks along the coast and near open waters in the Leeville area, from Fornation Islands through Northwest Point and Philo Brice, Four Piles all the way to Casse-tete and Brush Islands, are arriving in big numbers. Since Friday however, sportfishermen in our area have been tied up in port or fishing Redfish inside, not because of the oil spill but because of the abnormally high wind and water, aided by a Full Moon tide. The filming trips I had scheduled for Saturday through Monday were cancelled because of the wind. So I figured I would take advantage and head in for some editing and grass cutting. Yesterday afternoon I started getting calls from fellow Captains and anglers who managed to get out and catch some Specks as close as Little Lake, just west of Leeville. This morning, one of the guides that I work with and share information, called at 1030 and I quote, “I started near four piles and Devils Bay and worked my way to Brush,” he said. “By 1030 this morning, my group had limited out,” he added. Reports from Terry’s Bait shop were also positive as I spoke to him around 11am this morning.

– The Cajun Canyons Billfish Classic is still technically on…June 1-6. Cypress Cove is still open and doing business.  Steve Thomas, the tournament director, reports that they remain optimistic the tournament can go on but it’s not looking good right now.  Announcement coming by May 10. 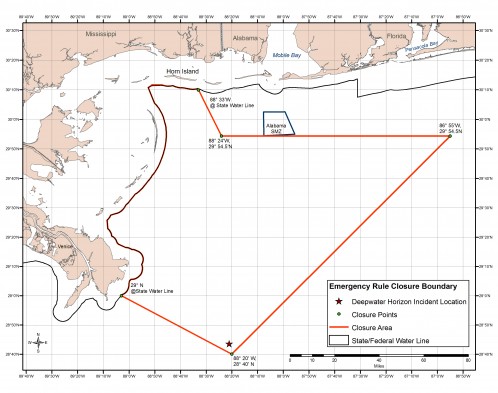 Keep these guys in your thoughts and prayers as the impacts of this tragedy continue to be far-reaching..