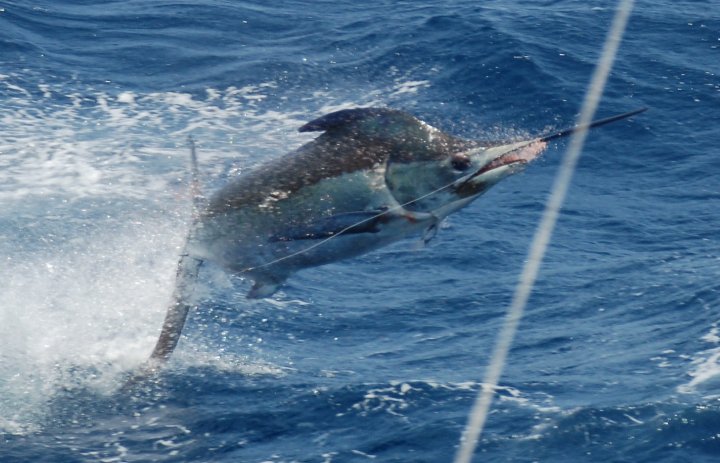 The Billfish Report is counting down its Top 10 Billfisheries of the Year, and coming in at #4 is Venezuela.  Criteria for our Top 10 include numbers, variety, and size of fish.

Venezuela is synonymous with a Billfish Grand Slam. In fact, it is really the birthplace of the infamous Blue Marlin, White Marlin and Sailfish trio. Not only can you catch a slam here a day, you can catch two or three if the blue marlin are cooperating.

This is not a size fishery for the most part, but 10+ Sailfish and 10+ White Marlin days are not uncommon and 5+ Blue Marlin days were reported a number of times in 2010. We even heard of a local boat raising 16 Blue Marlin in one day. While there may be a prime season here, you can catch a billfish almost any day of the year here.

Not too long ago Venezuela was the “go-to” place on the world circuit of billfish. A number of American boats called Caraballeda home. However, sadly in the last five years, the political turmoil of the Venezuelan government has caused a number of top boats to not return. For those who stayed though, they were reminded that the fish don’t care who is in office.

We are fortunate to have made some friends with local Venezuelan’s Jose De Veer-Spot and Jose Alejandro Moreno who have kept us up to date on this year round fishery. Likewise, American Capt. Jimmy Grant on the Waterman has provided us with a wealth of reports.

Here are some fishing report highlights from 2010.

Vintage was 4-5 on Blue Marlin (one at 500 lbs), 9-14 on White Marlin and 0-3 on Sailfish. That same day, both Waterman and Prowess achieved Billfish Grand Slams.

Byrd’s Nest was 6-8 on Blue Marlin, 1-1 on White Marlin and 1-1 on Sailfish for a Billfish Grand Slam

Thanks very much to Dr. Ken Neill for allowing us to use his great shots.

Congratulations to the Venezuela, the #4 Billfishery of 2010.