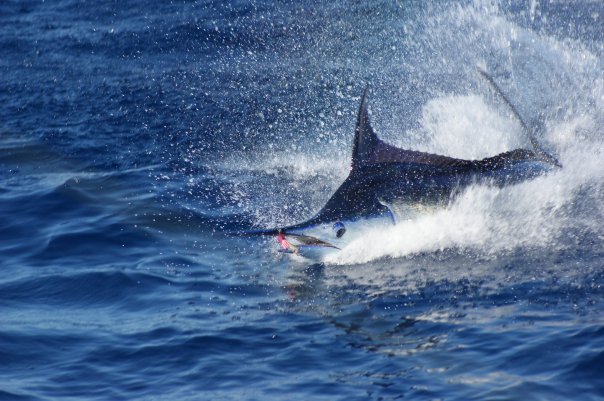 Los Suenos, CR – If you followed us on Facebook or got our Twitter feed in March, you probably got overwhelmed with the number of fish being caught off Jaco, Costa Rica. You heard us report on a number of 20+ sailfish days for boats like Adios, Big Oh, Game On, G-Rod and Tuna Bite. There were so many 10+ fish days, we lost track. In fact, there were over 1,000 billfish caught in the Los Suenos Tournament alone.

We didn’t really put in perspective however until we got the months total for Capt. Vince Austin on Adios. In 21-Days fishing, he went a staggering 345-582 on Sailfish and 8-12 on Blue Marlin. Fact is, he probably would have caught more blues if it was not for those “pesky” sails. So that you understand these numbers, think about this. He caught an average of almost 17 billfish a day. As if that is not impressive enough, he saw 28 billfish a day!

We have seen some crazy numbers in Guatemala on sails, but I am not sure we have seen an entire month with this consistency on a bite. In fact as we look back in our notes, this bite lasted almost 6 weeks.

Congratulations to Captain Vince Austin for such an impressive catch total and to all the boys who had great days out on the water down in Los Suenos.