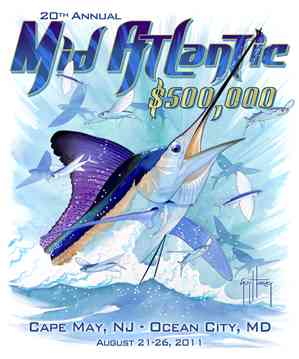 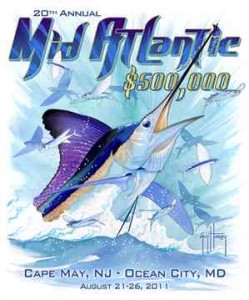 Cape May, NJ – The earthquake that shook the entire eastern seaboard from North Carolina to Canada also shook the leaderboard on Day Two of the 2011 Mid-Atlantic $500,000.  With an improved weather forecast which included light winds and calm seas, 111 boats gave it a go and headed offshore today. The earthquake didn’t seem to bother the tournament’s targeted species though and the leaderboard changed as fast as a politician’s opinion.

In the white marlin category, Raymond Craig’s Amarula Sun weighed a 72-pounder to take the lead while Frank Holtham’s Inappropriate weighed twin 69-pounders and is tied for second place.

Steven Scioscia’s Tail Spin with Captain Dennis Glynn at the helm took the lead in the blue marlin division after weighing a 565-pounder. Damien Romeo’s Hubris is in second place with a 498-pounder and Dan Burt’s Pumpin Hard 66 is right behind in third place with his 494-pounder.

Nick and Trish Rodriguez’s Par Five lead the tuna category with a 71-pound yellowfin followed in second place by Tom Jarvis’ Dumb and Dumber with a 63-pounder. Third place in the category currently belongs to Jim Foulke’s Trust Me Too with a yellowfin of 58 pounds.

Art Boykin’s Lucky Duck II weighed a 38-pound dolphin today to take the lead in the category while Dave Migliore’s Blackbeard’s Revenge now leads the wahoo category with a 50-pounder.

Please note the Mid-Atlantic $500,000 is a private event and not open to the general public. Tournament credentials are required for access to any tournament activities and facilities.