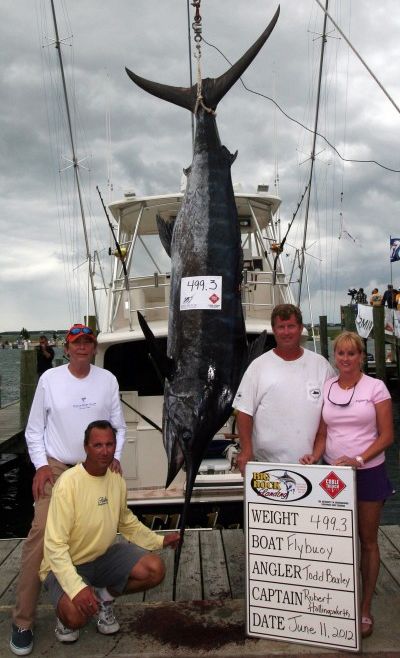 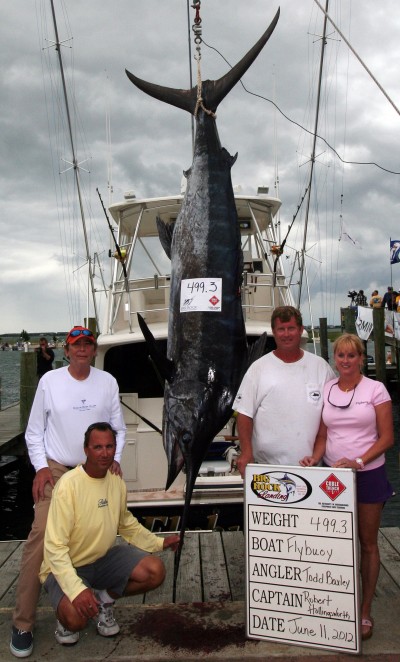 Fans pulling for the Inspiration fishing team had their prayers answered as big blue marlins continued to be elusive on the final day. Inspiration captain Casey Wagner, Morehead City, and angler Terry Clark, Beaufort, landed a 437.7-pound blue marlin Tuesday that proved big enough to finish in second place. Wagner, the current president of the Big Rock, had been to the weigh station eight previous times with a blue marlin and never before finished in the money. The ninth time proved to be a charm as Wagner receives $212,640 for his second-place finish..

As the 54th Big Rock entered its final day, Flybuoy owner Gary Davis and crew were still winging along in first place. But the billfish bite took off early Saturday and it appeared that their week-long lead would fly away. Anglers recorded two blue marlin catches in the first 76 minutes of fishing and it looked as if the blue marlin standings were destined to change.

The Can Do Too, a boat captained by Jim Foy of Brielle, N.J., and Fishing Partner, captained by Daryl Brower, Morehead City, arrived at the scales with blue marlins that met federal requirements but neither fish met stringent tournament minimums of 400 pounds or 110 inches in lower jaw fork length. Both catches failed to qualify for prize money. Flybuoy crew members could finally throttle back and celebrate their win.

Just 63-of-120 boats in the tournament field were eligible to go offshore Saturday, the third straight day that gusty winds made trolling difficult. But the sea conditions were better than expected early on and anglers tallied four blue marlin hookups before 10:15 a.m.

Fishing Partner landed their blue marlin after a 57-minute fight and elected to continue fishing. Brower’s anglers tallied a “double header” white marlin release (two at the same time) but could not catch and release enough billfish to place in the overall release standings.

The 54th Big Rock finished with 83 billfish releases (43 blue marlin, 34 white marlin, two hatchet marlins and four sailfish) and just four boated blues for a 95 percent release rate. The tournament experienced a tremendous bite in the first half of the event, but this was interrupted for two days when a Nor’easter churned through the Big Rock’s fishing grounds.

While Flybuoy’s blue marlin is smaller than all but two Big Rock winners in the past 22 years, it’s bigger than all but one of the winners in the 60’s. Flybuoy owner Gary Davis visited Big Rock headquarters Friday and said he was prepared to celebrate the win or congratulate the champion, whichever way it turned out.

“We have to sweat it out one more day,” Davis said. “The weather seems to be helping us, though.”

But not initially, Flybuoy missed the $246,500 Level VI Fabulous Fisherman’s prize by 7/10ths of a pounds and it is estimated its blue marlin lost several pounds in the hot sun between Flybuoy’s take off from the Big Rock fishing grounds until its arrival at the weigh station. Since no boat landed a blue marlin that weighed a minimum of 500-pounds, 100% of the entry fees for that level will be returned to the competing contestants.

Whitaker has had plenty of success in the Big Rock. His boat scored a “tuna double” in 2003, capturing first and second in the tuna division that year.

Pig Rig, captained by Tommy Herring, Newton, captured the final daily $2,000 prize for scoring the first release Saturday. The Pig Rig crew hooked and released a white marlin 32 minutes into the competition, after Can Do To and Fishing Partner elected to boat their blue marlins.

There was just one change to the overall gamefish standings Saturday, but it was a big one. Accordingly III, captained by Peter DuBose, Morehead City, showed up at the scales with a 32.9-pound dolphin reeled in by Todd Smith, Cedar Point, to win the $77,350 in the Dolphin Winner Take All division. Accordingly III also finished second overall dolphin standings to rake in another $3,116.67.

Impulse finished first in the wahoo division with a 53.1-pounder landed Monday by Cary angler John Elmo. The Miss Peggy Sue came in second place with a 36.3-pound wahoo teeled in Monday by David Heeter of Spencer, W.Va. Impulse will receive $5,743.73 in daily and overall winnings. The Miss Peggy Sue comes away with $3,895.84 in winnings

Sensation finished as the only boat to land a tuna in the past two years. The 56.8-pound yellowfin tuna reeled in Tuesday by Walt Hooks of Wilson earned the team a tuna prize consisting of monies from both tournament tuna purses that total aproximately $34,000.

The 54th Big Rock wraps up Saturday night with an awards banquet set at the Crystal Coast Civic Center. Tournament officials will distribute winnings to the winners from the $1,252,950 purse.