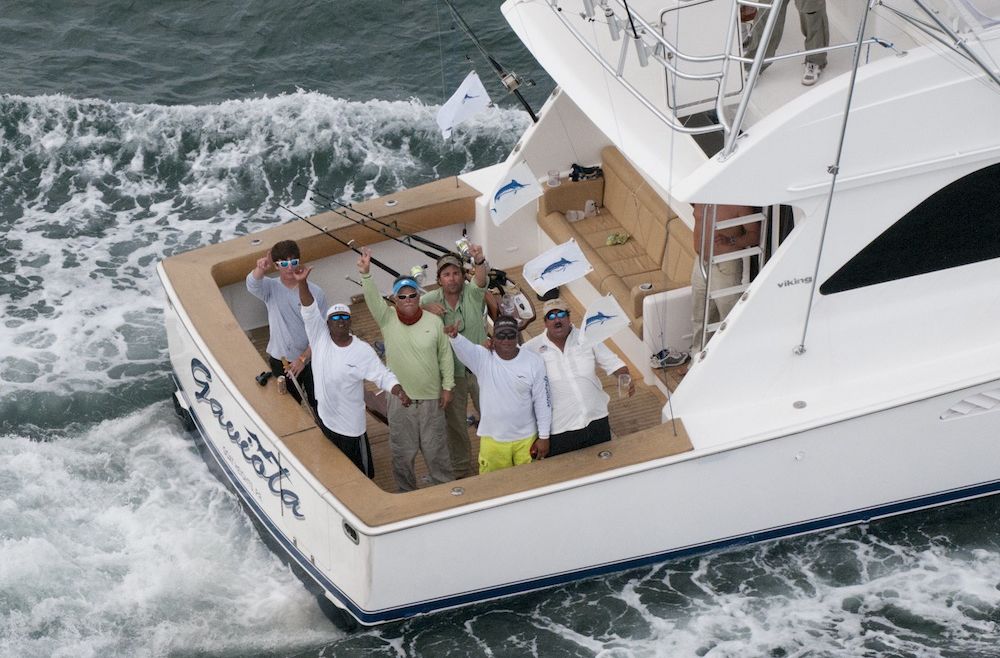 San Juan, Puerto Rico –Club Nautico de San Juan’s 59th International Billfish Tournament (IBT) concluded with a spectacular 102 blue marlin releases, plus achieved another milestone in billfish conservation history by being the first tournament to partner with the National Geographic Society in the deployment and recovery of billfish Crittercams six successful times to capture images of these magnificent fish in their natural environment.

“We set a new record this year of an average of 2.5 blue marlin released per boat. It was a very successful tournament,” says tournament chair, Miguel Donato.

Gaviota, a Viking 52, won the Top Boat trophy by being the first to release six blue marlin.

Joe Vizcarrondo, Gaviota’s owner and angler, explains, “We’ve fished in this tournament for over 10 years and this is the first time we’ve won the overall. One of the great secrets to our success was Capt. Luis Infanzon. He diligently stayed in position and tried to raise fish. The fact that he stuck to his method is why we finished the way we did today.”

Gaviota’s anglers Vizcarrondo, Ricky LeFranc and Frankie Mirandes, collectively released three blue marlin the first day, two the second, none the third and one on the fourth and final day of fishing.

Four other boats also released six blue marlin by the time lines out was called at 4 p.m. They are, in order of finish in the tournament Amigo, Jean B and GinPoleAde.

The Best Local Angler recognition went to Puerto Rico’s Bruno Rodriguez, an experienced sportsman who has fished all his life with four releases, followed by Efrain González Caro (1,200 points) and Nicolas Carvajal (1,200).

Jaime Fullana, who released three of the dream team’s eight marlin and who has being an Organizing Committee member for decades, said “we enjoyed perfect fishing, perfect weather and a bit of luck. It’s a great feeling to win.”

Puerto Rico’s Stephanie Lebron, fishing aboard the Bertram 54, Tati-Way, successfully defended her title and earned Best Female again this year with two releases. “I caught the first fish on third day of fishing,” explains Lebron. “It was over 500 pounds; the largest I’ve ever caught. It took me over 45 minutes to reel it in and make the release. I am so proud of that fish.”

Lebron released her second blue marlin, a smaller fish that took just 10 minutes to fight, on the final day of fishing. Lebron beat six other female anglers competing in this year’s tournament.

A total of 102 blue marlin were released by 148 anglers from 8 countries fishing aboard 43 boats.

The IBT is a well-orchestrated fishing competition that boasts nightly parties, a spectacular boat parade, special Ladies Program, a Shoot-Out start past the famous El Morro Castle, honorary jet fly-over welcoming the fleet back to shore and a tournament finale Gala Awards Banquet where over 30 prizes are presented .

In addition to its partnership with the National Geographic Society, the IBT welcomed professionals from The Billfish Foundation and International Game Fishing Association (IGFA).

“Expect the tradition to continue next year for our 60th Anniversary,” invites Donato.