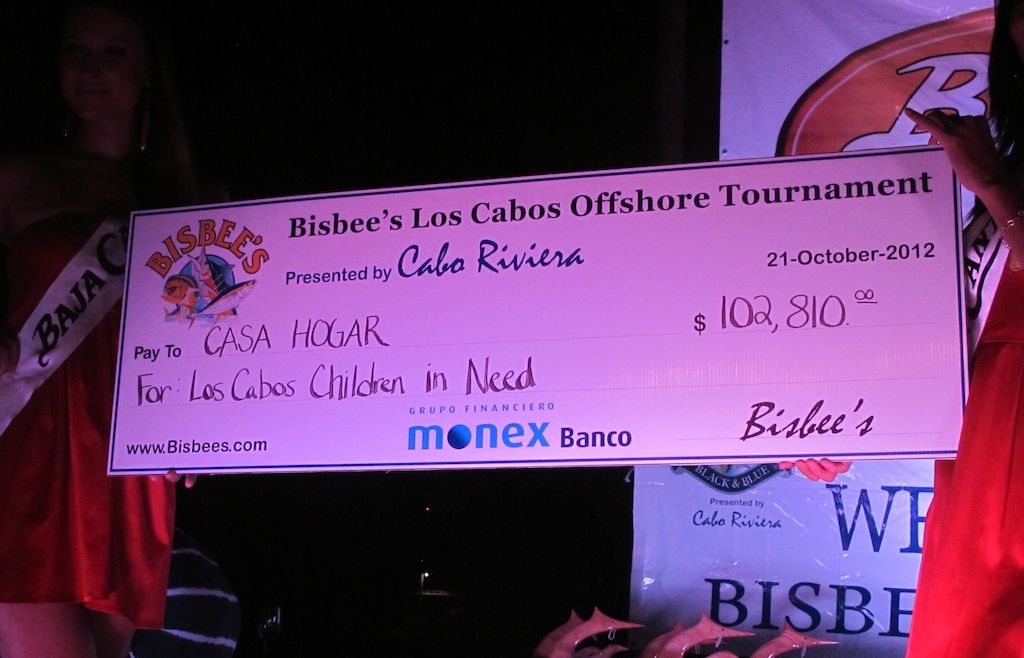 Cabo San Lucas, Mexico – In years past, the Bisbee’s Los Cabos Offshore Tournament has always been known casually as the “Little Bisbee’s” because of its size and potential winnings. Its laid-back, family attitude and game-fish format attracted teams that used it as a warm-up for the Black & Blue, which always starts a couple days later. After the impressive showing the last few days, however, it’s clear the LCO has come into its own as a major player on the Baja tournament circuit.

A total of 80 teams with 341 anglers competed for $486,590 in cash prizes in the 2012 event, buoyed by the added $2,000 optional cash category. Nearly three-quarters of the boats chose to enter across the board at all levels. As a result, Chupacabra, a 64 Hatteras skippered by Capt. Jesse Scarborough, took home the biggest check during Sunday night’s award’s banquet at Baja Cantina. Angler Roy Oliver and his team won $206,973 for sweeping the Day One daily jackpots and the top marlin overall with a 583-pound blue.

Sneak Attack, a 65 American Custom Yacht run by Capt. Sammy Talbert, pocketed $189,837 for weighing the second largest fish and the Day 2 marlin winner. Darin Antin was on the rod for the team’s 565-pound blue marlin.

Bisbee regular Steve Spina outlasted a monster 314-pound yellowfin tuna aboard 19’s Toy, a 35 Cabo Yacht, to earn $29,165 for the top tuna overall and Day 1 tuna jackpot. Capt. Kevin Masunaga was at the helm for the winning catch. But Sam Worden and his team aboard C-Bandit, a 75 Titan, didn’t leave the stage empty-handed. They were awarded a check for $15,725 for the last fish weighed, a 299-pound yellowfin tuna that keep the weigh station crowd in suspense until the very end. Capt. Pete Groesbeck was behind the wheel when the big tuna slammed the skipjack bait.

Capt. Ramon Aqundez guided Ty Bragg and his team aboard Hang ‘Em High, a 58 Miller Marine, to the largest dorado boated. It tipped the scales at 54.8 pounds and was worth $29,165 as the first-place fish and Day 2 jackpot winner in that game fish category. Andy North and the crew aboard Predator, a 64 Viking, took home $15,725 for the Day 1 dorado, a 45.4-pounder. Capt. Morgan North is the skipper aboard Predator.

A total of 38 billfish were caught during two days of fishing, with 36 released. The overall release ratio was 94.7 percent. Ez-Duz-It, a 52 Egg Harbor, was recognized as the top release boat, followed by Sea Angel and Pelese. Each team won beautiful David Wirth art for scoring the most release points.

The other big winners of the evening were the less fortunate boys at Casa Hogar, a local Cabo orphanage. A check for $102,810 representing 100 percent of the tournament proceeds was donated to help support this worthwhile charity. All future LCO events will adopt the same charitable format, according to Wayne Bisbee, the tournament’s director.

“Thank all of you for making this possible,” Bisbee said at the conclusion of the awards banquet. “You caught some really nice fish, released a bunch more and helped make things brighter for some boys who really need a boost. This week, the Los Cabos Offshore Charity Tournament grew up in a big and special way.”