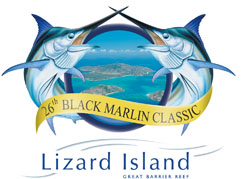 Lizard Island, Australia – Congratulations to Top Shot for winning the 26th Annual Lizard Island Classic. It took 14 Black Marlin to win this years week long competition. Little Audrey managed 8 Black Marlin to take 2nd. Fishing was slow on average for most boats, with 26 Boats participating and 84 Black Marlin released. It can be said however, that only this Tournament could be deemed “slow”, when 7 Grander Black Marlin were released during this competition. This is absolutely unparalleled Tournament when it comes to big fish. Below is the report from Bob Lowe, the President of the Lizard Island Gamefish Club.

The 26th Lizard Island Black Marlin Classic got off to a flying start at the Calcutta Auction Briefing Dinner on Saturday, 20th October 2012, in the Marlin Centre at Lizard Island Lodge, where 26 Teams from 9 Countries registered,

After a spectacular Parade of Boats in Anchor Bay in front of the Lodge, the signal was given for the fleet to proceed to the Outer Reef for start fishing and our boats from 80ft down to 35ft blasted off in a spray of blue water foam.

DAY 7: Glassy seas, but the slowest day of the event! There were 5 strikes for 2 tags, with a 950 pounder to “Maverick”, who took out the Daily Award on a count back from “Top Shot” with 1 tag.

Overall Champion Team was “Top Shot” with 14 tags from Runner-up “Little Audrey” with 8 and “Kekoa” in 3rd Place with 7, on a count-back from “Maverick”, also 7.

Runner-up Male Angler was Jim Wild from Canada on “Viking II” with 6 tags.

Champion Female Angler was won by Sharon Poulter on “Think Big” with 5 tags.

Runner-up Female Angler was Sue Ahlers on “Hellraiser” with 1 tag, on a count back from Patricia Azelis on “Reel Chase” and Sue Tarbotton on “Iceman”, who also had 1 tag each.

Champion Boat went to “Top Shot” with 14 tags from Runner-up “Little Audrey” with 8.

Overall, there were 158 strikes, with 119 hook-ups for 84 tags. With 7 “Granders”, the estimated size of all 84 Black Marlin tagged was as follows:

The Stats of this 26th Lizard Island Black Marlin Classic supports the claim that this event is the best Heavy Tackle Black Marlin Tournament in the World!!