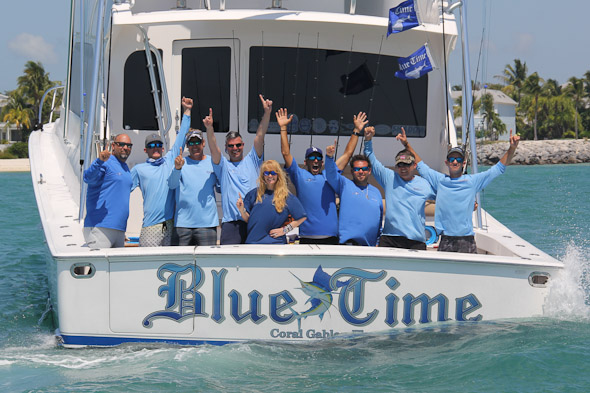 Key West, FL (From www.worldsailfish.com) – The final day of the World Sailfish Championship presented by Bass Pro Shops proved to be everything anglers have come to expect from the World’s Richest Sailfish Tournament.

Sunday featured fast and furious action from the time the first lines hit the water, constant jockeying for better position and the nail-biting finish that has come to serve as the event’s signature.

This year, it was Viva La Vida fighting fish in overtime and Blue Time listening intently to the radio communications, waiting for final confirmation of a dream come true. That word finally came when Viva La Vida ran out of time and could only manage a doubleheader, which was good enough to tie number-wise, but late enough to allow Blue Time the win based on the fact they released their last fish first.

When the rods were put away, it was Blue Time taking home the championship, thanks to a 14-fish final day, with a total of 17 releases. The win earned boat owners Benjamin Leon III, and his wife Lisa, $184,962.50.

Viva La Vida, which led after the first two days of fishing, also finished with 17 releases, including eight on Sunday. Swagger was third with 16 releases.

Overall, Sunday was the best day of fishing for the entire fleet. Weather conditions improved and the current began moving enough to allow the 34 boats to release a total of 129 fish on Sunday. That was a dramatic increase from the first two days, which saw a total of 73 fish caught.

“It’s amazing how the conditions can change overnight,” said Capt. George McElveen, skipper of Swagger. “It was brutal for the first couple of days, but today was the conditions we all hoped for when we got here.”

An east wind sparked the current and pulled the fish to the surface, allowing teams to choose their preference of kite fishing or sight fishing. Most started the day with kites in the air and several switched to chasing tailers later in the day.

“We caught 90 percent of our fish kite fishing,” said Blue Time’s Capt. Bill Wieteha. “There were tailing conditions towards the end of the afternoon, and we were a bit skeptical because there are guys out here who can capitalize on that.”

One of those teams is Viva La Vida, led by owner Dr. John Cole, who specializes in chasing tailing sailfish. To make things just a little tighter, Viva La Vida happened across every tournament sailfish angler’s dream – a wolfpack – just before lines out was called at 2 p.m. And the other teams knew it.

“About 1:30, my stomach went into lockdown. We were so nervous, we were holding our breath,” said Leon, who sat the team down Saturday night for a pep talk. “Nobody wanted to say anything because nobody wanted to jinx it. It’s nice to see you can compete against guys of this caliber because they’re the best in the world.”

As Viva La Vida moved into position, Cole and his crew grabbed spinning rods and began pitching baits to what he described as “a sea of black, a huge body of sailfish.”

After a few misfires – hitting a couple in the head, throwing a couple baits off – Viva La Vida hooked a doubleheader with about 30 seconds to go before lines out. A third fish was swimming with them but they were unable to get what could have been the winning hook in its in mouth before 2 p.m.

After nearly losing the fish that bolted for the open water, Viva La Vida managed to release both fish 21 minutes after lines out. But it was only enough to tie for the most releases, leaving the team to settle for second place.

“All we knew was they were two big fish. We didn’t know how big. If we could have had just one more…,” Cole said. “It was very exciting to have about five minutes to have that shot to pull a rabbit out of a hat. If they hadn’t called lines out, I couldn’t begin to tell you how many fish we could have caught.”

Instead, the trophy went to Blue Time, which included Top Female Angler Lisa Leon (9 releases) and Wieteha, who fished in the inaugural World Sailfish Championship 11 years ago but earned his first win Sunday.

“It was as down, down, down to the wire as it could be,” Wieteha said. “I’ve probably fished this tournament eight times now and I’ve always wanted to win this one. I’ve come close a couple times. Once we racked up some numbers in the morning, it was like ‘This is for real. We can make this happen’.”