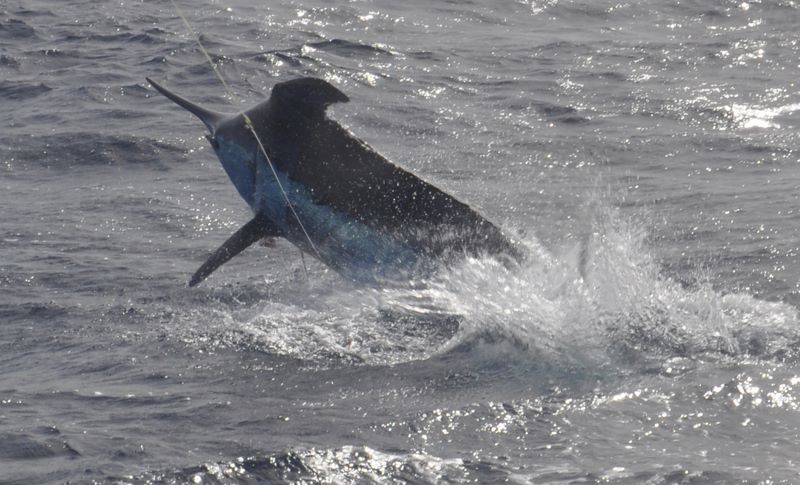 The Billfish Report is counting down its Top 10 Billfisheries of the Year, and our #2 Billfishery are the Cape Verde Islands. Criteria for our Top 10 include fish numbers, variety of billfish species, average size of fish, length of season and numbers of boats fishing.

Some fisheries have all the luck! Great numbers of Blue Marlin with size as well? A typical day in the Cape Verdes Islands is a shot at 3-4 Blue Marlin with a chance at one over 500 lbs. Sound good? In fact, we had reports of at least fifty-seven (57) Blue Marlin released over 500 lbs. from this small fleet of 5-6 boats which would place them No. 3 in the World for just big Blue Marlin. Of those fifty-seven big fish, nineteen (19) were over 700 lbs. with two fish over 900 lbs courtesy of the Happy Hooker & Nha Cretcheu.

This was the first year we did not have a Grander reported in the last 5-Years. By comparison in 2012 (one of the finest seasons ) we had four (4) Granders reported. In fact, you could call 2013 a down season, but a down season in the Cape Verdes is a spectacular season almost anywhere else. The Cape Verdes have never been ranked lower than #3 in our Top 10 and for good reason with an almost unrivaled abundance of Blue Marlin. It is not uncommon at all to get 10+ Shots a day on Blues. Visiting boat Big Oh had a 5-Day stretch where they hooked up to 65 Blue Marlin, an incredible 13 Blue Marlin average. On a single day trip, Smoker raised 19 Blue Marlin. Not many fisheries can touch those numbers!

There is not a lot of variety in this fishery with everyone focused on Blue Marlin, but White Marlin are commonly caught here as well as Spearfish. There was at least two Grand Slams caught on the Big Oh (Blue Marlin, White Marlin & Spearfish) but that is not a common occurrence. The Cape Verdes are a year round fishery, but most boats fish the great early spring bite and stop fishing by the end of July as may captains move on to other fisheries. The Cape Verdes is certainly one of the finest fisheries in the World and the best in the Eastern Atlantic for Blue Marlin. If incredible Blue Marlin fishing is on your list, the Cape Verdes is an absolute must stop!

Congratulations to all the crews fishing in the Cape Verde Islands our #2 Billfishery of the Year!