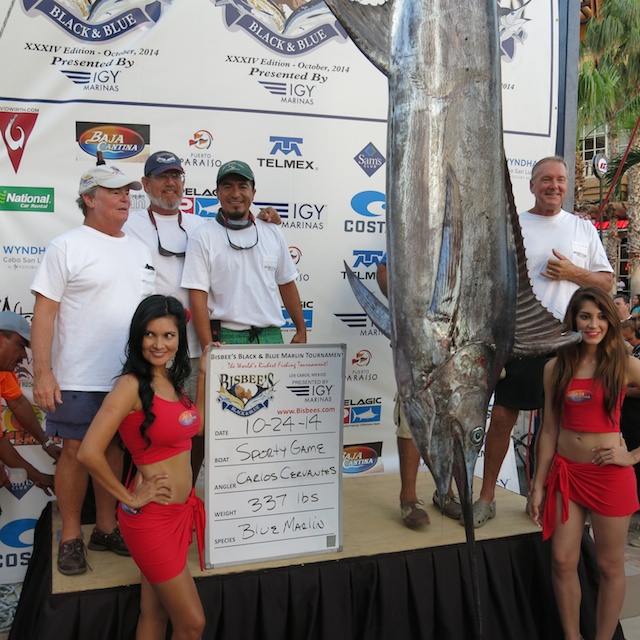 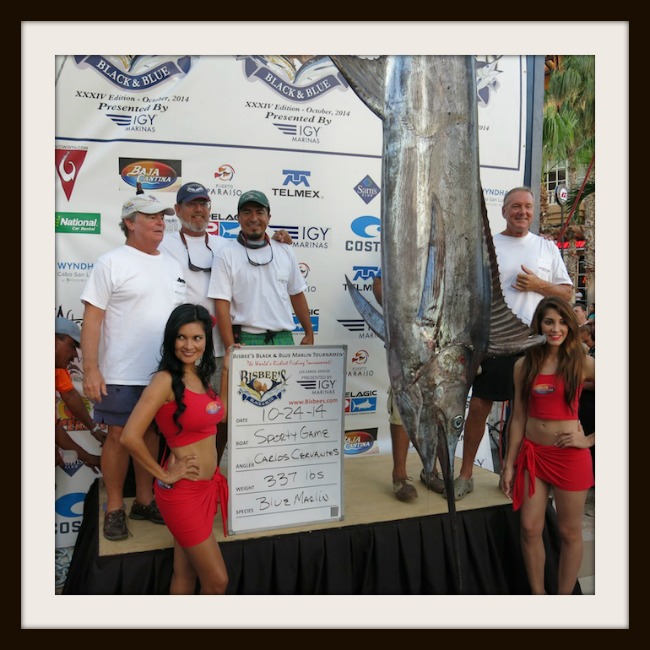 Cabo San Lucas, Baja California Sur (By Capt. Dave Lear) – There are several possible reasons of explanation: Competition, adrenalin, pride, bragging rights or money. Whatever it is, the Bisbee’s Black & Blue has a reputation for last-day theatrics and this year’s edition was no exception. With no clear winner, jackpot-wise, stepping up the first two days, it took a flurry of fish the third and final day to keep the late-drama streak alive. And in the end it wasn’t a monster fish or a tournament record making the most impact. But with 37 pounds to spare, Sporty Game scored the top prize and the biggest payout of the week. The team had bet across the board in all possible jackpots in the optional categories and stands to win close to $1.5 million for its catch.

Angler Carlos Cerventes fed a live skipjack to the marlin near the Iman Ledge and after a short fight the Sporty Game crew had the fish in the cockpit. Owner/captain Dan Lewis, of LaJolla, California, has been fishing the B&B since at least 2000.

“It was a great fish,” he said after the weight was announced to the roar of the packed throng surrounding the scales. “This is always a very competitive event and there are still more fish to come in.” The 337-pound mark would hold up through the evening, however.

Baja Benditos got the party rolling shortly after the scales opened at 2 p.m. Angler Nathan Visser and his buddies from Cabo San Lucas boated a 320-pound blue marlin in Grid E-6 after a brief 35-minute fight. It was the first marlin ever boated by the local team in the B&B and the fish was fooled by a blue/yellow Zuker 5.5 lure.

“The water was calm and there were a lot of flying fish and porpoises out there. Conditions were good,” Visser said. Baja Benditos ran back out in search of another one in the remaining couple of hours.

Survivor, a 36 Skipjack, weighed the second-largest fish of the day, a 328-pound blue that was captured after a 20-minute fight. Survivor was fishing north of the Gordo Bank in the Sea of Cortez.

“We were hoping it it was bigger than it is,” said owner Ken Leisher of Whidbey Island, Washington. “It will do. It was a good catch.”

Joel Rivas and Team Rivas Brothers waited until the last half-hour before bringing their fish to the scales. At 303 pounds, it just made the 300-pound cut-off, but the local team didn’t care. It was a qualifier in the richest sport-fishing tournament in the world. And on the last day, when the game is on the line, that’s all that matters.