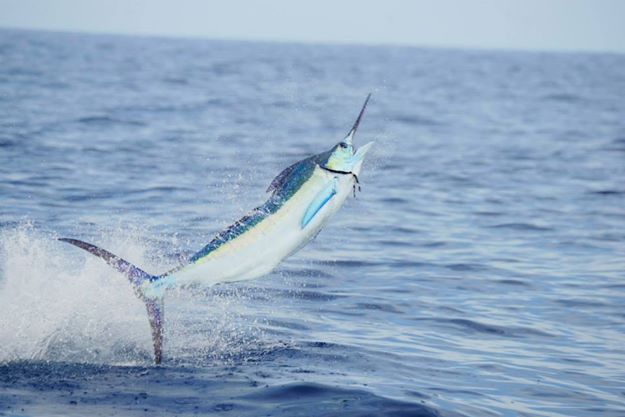 The Billfish Report is counting down its Top 10 Billfisheries of the Year, and our #1 Billfishery goes to Jaco & Quepos, Costa Rica. Criteria for our Top 10 include fish numbers, variety of billfish species, average size of fish, length of season and number of boats fishing. With over 11,000 Billfish Reports submitted to us in 2014 from around the World, to even be considered for our Top 10 makes a fishery one of the best!

Every year we have one fishery that stands out from the rest and this year that distinction goes to boats fishing out Jaco (Los Suenos Marina) and Quepos (Pez Vela Marina) Costa Rica. The stumpers were simply staggering. It was the one place in the world where catching double digit Blue Marlin and Sailfish was an absolute reality.

This fishery is year round with a large fleet of boats focusing on the bite starting in November and going through April. Blue Marlin, Sailfish, Striped Marlin and Black Marlin can all be found in these waters but the Sailfish and Blue Marlin are caught in great abundance. There was at least 49-Days that a boat returned with at least thirty (30) Sailfish released, with Sea Fix and Tarheel both doing that five (5) times. Tarheel & Tijereta had the finest days in world on Sailfish, releasing a mind blowing 85. The second best day in the world was also turned in from this fishery with Sea Angel recording a 76 Sailfish day.

Congratulations to Jaco & Quepos our #1 Billfishery of 2014!