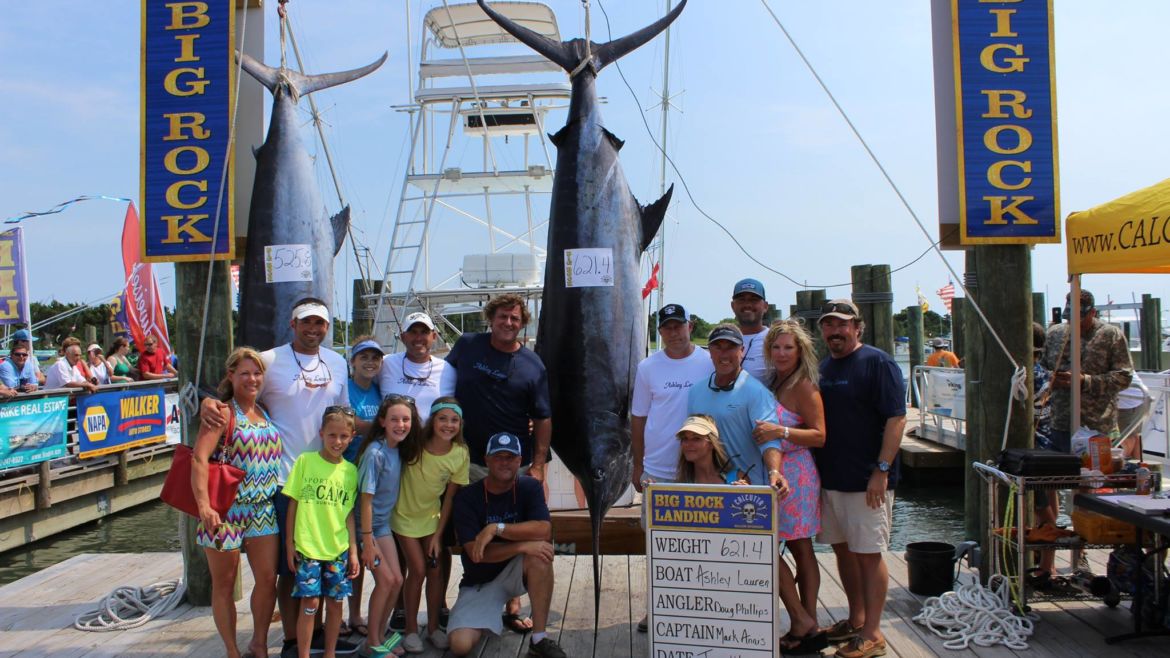 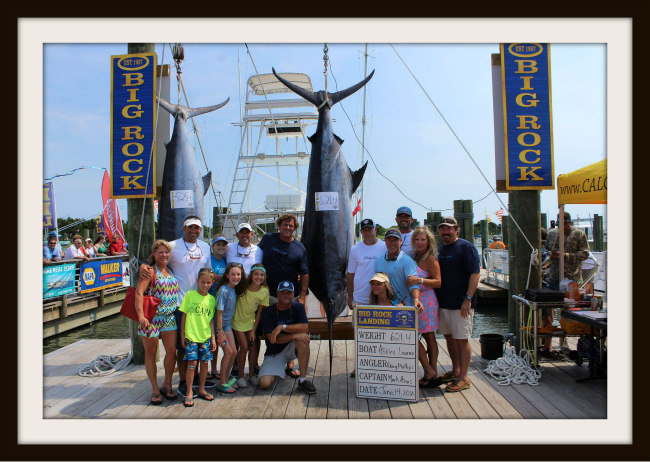 Just as no golfer has ever won the Masters and the pre-tournament Par-3 contest in the same year, no KWLA winner had boated a blue marlin during the Big Rock that followed their victory. Ashley Lauren put an end to this 18-year jinx Tuesday when angler Doug Phillips, Garner, reeled in a 621.4-pounder to take the Big Rock lead for good.

Ashley Lauren captain Mark Annis, Clayton, was at the helm for all winning catches. Angler Jackie Miller, Clayton, got the Ashley Lauren team on the KWLA leader board with a release of a blue marlin. Mark’s wife, Kim, locked up the KWLA victory with a second blue marlin release.

The Ashley Lauren topped a record field of 125 boats in the KWLA and then came out on top of the 174 boats in the 58th Big Rock to score the double victory.

The Viking 72 fishing team finished third in the 58th Big Rock with a 564.1-pound blue marlin reeled in Friday by angler Drew McDowell, Jupiter, Fla. The Viking 72 – teammates of Viking 62 which won the 57th Big Rock in 2015 – edged the catch reeled in by Piracy angler C.J. Struyk, Morehead City, who landed a 558.8-pound blue marlin Tuesday. All that separated second place from third place was 7/10’s of a pound — about two sticks butter. The Piracy’s catch finished out of the money by 5.4 pounds … roughly the weight of a bag of sugar.

It was the narrowest margin of victory by one team over another since the Big Rock changed from recognizing five place winners more than 20 years ago.

There were actually two improbable double victories during the past eight days. Inspiration captain Casey Wagner, Morehead City, captured the KWLA Winner-Take-All (WTA) dolphin prize of $49,725 with a 31.2-pounder reeled in by Morehead City angler Jeannie Fischler. Wagner then won the Big Rock WTA dolphin prize worth $130,050 with a 49.3-pounder caught by Trent Ragland, Morehead City.

Perhaps divine intervention had a hand in the double victories. The Inspiration – winner of the 56th Big Rock in 2014 – was named in memory of Wagner’s wife, Keli, who fought but lost a valiant battle with cancer in 2008. The Ashley Lauren was named in memory of Ashley Lauren Annis – daughter of Mark and Kim Annis – who passed away from a rare blood disorder in 2005.

“It’s just so special with how everybody has supported us throughout this thing,” Annis, told a newspaper reporter. “The boat was named after my daughter so we always feel she’s fishing with us when we’re (offshore).”

Bank Walker captain Bryant Montague, Raleigh, lost but then regained the Level V release division lead Friday with a third blue marlin release for the week. Montague tallied the first release of the tournament and added a second blue marlin release Tuesday. The Bank Walker won the division with 1,200 points to capture the first place prize of $88,612 plus Level I release prize money.

Islander, captained by Bobby Schlegel, Greenville, briefly held the tournament lead with the release of two blue marlins and a white marlin for 925 points. Islander finished second to receive $53,167 plus Level I release prize money.

The tournament featured an excellent billfish bite Monday, Tuesday, Thursday and Friday that was interrupted Wednesday by a system of thunderstorms that ran through the fishing zone. The adverse weather forced competitors to dodge waterspouts and lightning and many fished more than 100 miles offshore.

The bite did turn back on late Wednesday, but just seconds too late for Viking 72. The New Gretna, N.J., based boat, that just rolled off the production line, hooked a huge blue marlin 20 seconds too late to count in the tournament. The Viking 72 team locked down the reel drag to snap the line and watched as a blue marlin “much bigger” than the one they took to the scales swam away.

Anglers released 106 billfish (45 blue marlins, 34 white marlins and 27 sailfish) and boated nine blue marlins. The tournament had a 92% release rate and 7-of-9 landed blue marlins spent time on the Big Rock leader board.

Winners of the 58th Big Rock and the 19th KWLA received their checks and trophies Saturday evening at the Crystal Coast Civic Center in Morehead City. Competitors are already making plans for the 59th Big Rock set June 9-17, 2017.