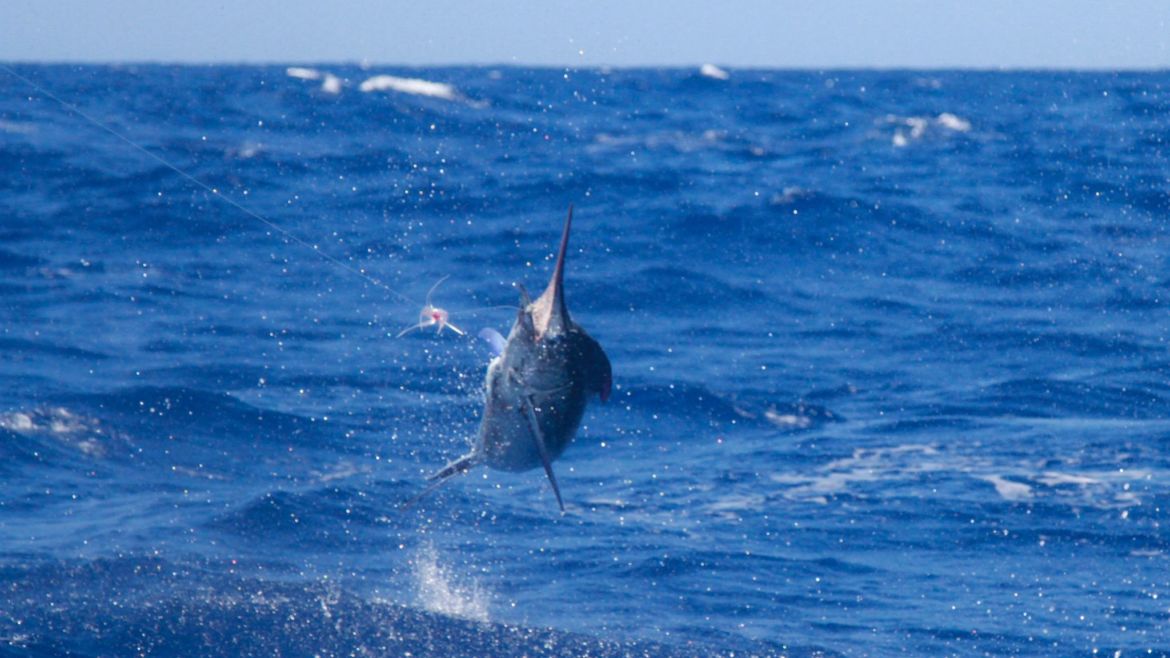 Casa De Campo, Dominican Republic – The Blue Marlin have started to show off the eastern tip of Hispanola. While most boats are fishing the various FADS, there are Blue Marlin feeding and patrolling along the drop offs as well. Boats are seeing at least seeing a couple Blue Marlin a day, but some are raising as many 7-8. Betsy released 3, Delta Dawn released 3, Miss B Haven released 4 and Contango released 5. The bait has been moving around is not holding on all FADS, but the water looks good and Blue Marlin are hungry.

If you have not had the chance to fish and for that matter explore Casa De Campo, you are truly missing out. The words “world class” are often abused, but if there are finer all around facilities in the World, please let us know. This as as beautiful and all encompassing resort we have ever experienced. Does not hurt that is is extremely well kept and on the Marina side, I am not sure there is a more professional and certainly welcoming team than Josie Gonzalvo and Vilma Nunez.

We had the pleasure of fishing Casa de Campo last year with Capt. Gary Richardson on Reel Passion and Capt. Daryl Brower on Contango. We experienced exceptional fishing with both captains, which brought us back again this year. There are only 2-3 places in the world can consistently offer doubles, triples and quads of Blue Marlin. I am positive, there are few things more exciting that having all your baits with Blue Marlin on the chew. We feel very lucky indeed to have experienced that again this year on the Contango, where we not only raised two (2) triples, but with the fine team work of Capt. Brower and “Super” Mario, we released a triple as well.

Fishing on the Contango with this crew in this fishery is something you just need to experience. Capt. Daryl Brower is a wealth of knowledge having grown up fishing the North Carolina coast, but likewise fished seasons on the Great Barrier Reef, Bermuda and Madeira to just name a few. We love nothing more than to fish with folks that have the same passion for billfishing as we do. You don’t always get the fish, but you never doubt the effort. Even fishing as many days a year as these guys do, they seemed more upset to lose daylight than we were. On our five (5) Blue Marlin day, we released our first four (4) Blue Marlin in the morning. As the law of averages works, the bite slowed for us as we entered the afternoon. Many boats would have been content (we certainly were) but the boys on Contango wanted more and we were rewarded with our fifth (5th) Blue Marlin of the day, literally after the sun had gone down.  As Capt. Brower said, “you better be willing to put in the time if you want the numbers”. If you are headed to Casa de Campo or Cap Cana, I simply can not endorse these guys with more fervor. If you need more proof, they also won the Triple Header Tournament Series.

These waters give boats the opportunity to see 10+ Blue Marlin in a day, which is very special indeed. The Casa De Campo season has literally just begun and we should see solid Blue Marlin reports from here until April.