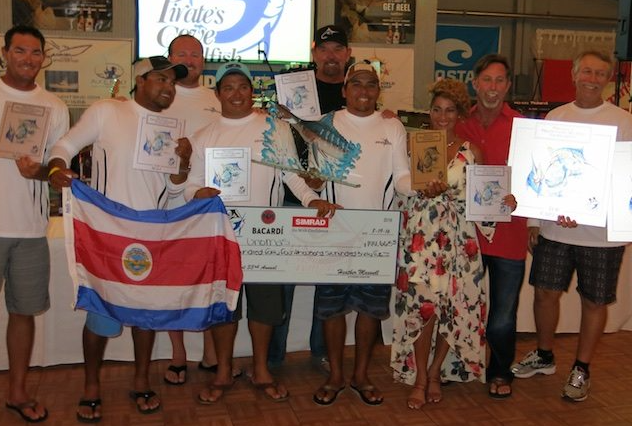 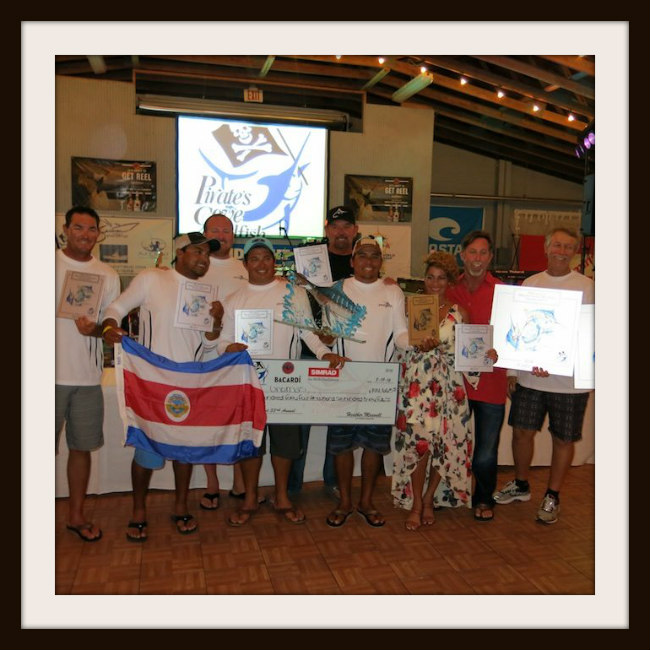 Manteo, NC – (Capt. Dave Lear) The numbers just kept adding up. When the final lines out was called on Friday afternoon, Uno Mas had scored more fish. Two more, in fact, than its closest rivals, giving this veteran team the overall win in the 33rd annual Pirate’s Cove Billfish Tournament. Owner/angler Brooks Smith was named the top tournament angler and the team earned a payout of $144,665 for 18 releases, including 11 white marlin, six sailfish and one blue. The 72 boats (464 anglers) competing this year were vying for a share of $612,000 in overall prize money.

“There’s just something about this place. We’re very comfortable here,” Lynskey explained. “Plus, we had our good luck charm,” he added, while hugging his wife Ivanna. “When you’re going against the best in the world, it’s good to come in here and beat ‘em.”

Rigged Up, a classic 54 Omie Tillet with Capt. Charles Haywood at the helm, came in second with 1600 points, all on sailfish. Kevin Eller, Buddy Shipp, Sam Daniels, Aaron Martin and junior Maddie Daniels, together with mates Brian Oliff and Bryan Wilson, won $114,965. Those winnings came from the second-place points/boat, a first-place daily and the first fish on Day 3.

Capt. Daniel Spencer led his team aboard Bullwinkle, a 57 Paul Spencer, to the third-place finish with 1,600 points based on time. Those efforts were worth $52,520. Pat Julian, Paul Spencer, Kit Purdy and Brad Wachowiak, along with mates Bennett Griffin and Michael Reash, released nine white marlin and seven sailfish for the week.

“We missed some fish we should have had, but that’s part of it,” says Lo Que Sea owner Tony Huerto, who took delivery of his new sportfisher in February. Lo Que Sea means “whatever” in Spanish and Huerto says the name fits his crew. “Fourth place is kinda like kissing your sister,” he added with a laugh. “I’m frustrated we didn’t land more fish, but we had a great time. We always do, competing against the best crews in the world.”

No blue marlin were boated this week, so the teams earned release points instead. Mister Pete, a 58 C&L (Capt. Alan Neiford) won $84,420 in the Costa See What’s Out There Release Division with three blues. Deep Blue, a 52 Buddy Davis (Capt. Josh Reason), came in second, also with three fish, to take home $36,180.

For the week, a total of 520 billfish were caught and released by the 72-boat fleet. None were boated. The cumulative numbers included 277 sailfish, 203 white marlin and 40 blue marlin.

“I’d like to thank everyone for joining us again this year,” says Tournament Director Heather Maxwell. “It’s been a fantastic week with an impressive number of fish. Of course, we couldn’t do pull this off without all our wonderful sponsors, especially Bacardi, Simrad, Release Marine and Pirate’s Cove. I’d also like to thank our hard-working volunteers and my board of directors for having faith in me. I look forward to seeing everyone back next summer, when we’re going to be even bigger and better than ever.”