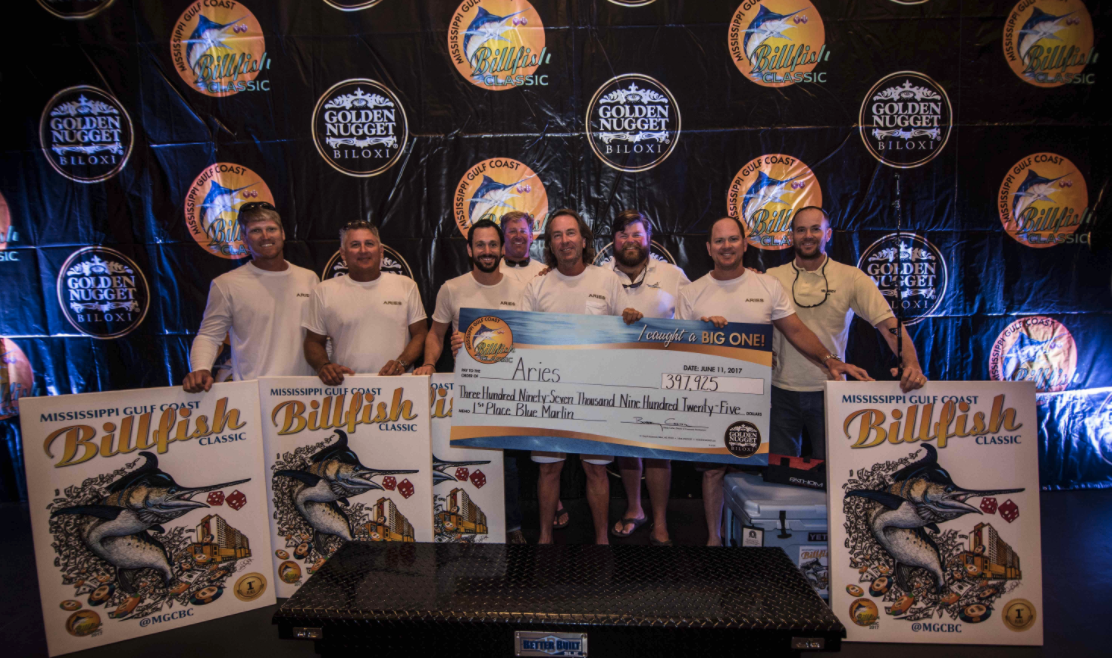 Biloxi, Mississippi – Aries is the first sign in zodiac astrology and is associated with energy and fire. Those traits also apply to Team Aries, which earned the top tournament award in the 2017 Mississippi Gulf Coast Billfish Classic that finished Sunday morning. Owner/captain Russell Craft, angler Jeff Friedman and family members Jason, Matthew and Darin Friedman brought the largest marlin to the scales—a 668.77-pound blue—that topped the next challenger by less than 15 pounds. For its efforts, the team is taking $397,925 home to Perdido Key. In true Aries spirit, the team was the first boat entered for the 21st-annual event when it signed up last fall.

“We love fishing this tournament,” Jeff Friedman says. “Bobby [Tournament Director Bobby Carter] and his crew do a fantastic job, the Golden Nugget is a great venue and we always enjoy the camaraderie and sportsmanship that’s on display here.”

Aries’ blue was boated with the fish’s bill broken off. That will sometimes occur naturally or it could happen during the fight. After a lengthy and thorough review process, the tournament committee ruled that the bill had broken by slamming into the boat’s hull (76 Viking) and allowed the catch to stand. Hollis Legg is the mate aboard Aries.

Mollie, a 68 G&S based in Destin, Florida and run by Capt. Jeff Shoults, took second-place honors but the most money. Thomas Cornelison and his teammates earned a payout of $403.005 for the second-largest blue (654.52 pounds), top release team (four blues) and optional entries. Mollie is a perennial contender on the highly competitive Gulf big-game circuit and nearly pulled off another win at this year’s Classic.

Born2Run is no stranger to the awards stage either and angler Dana Foster, Capt. Myles Colley and crew won the third place tournament award with a 563.92 blue. The 72 Viking based in Pensacola, Florida also scored 1,800 points in the release division for a combined payout of $242,940. Reel Addiction, a 56 Viking based in Pensacola Beach and run by Capt. Scooter Porto, took third-place billfish release honors (1,800 points based on time) and $70,380. Other boats winning optional billfish money included Wild Hooker and A Work of Art. Double J (553.43) and Breathe Easy (501.43) came in fourth and fifth, respectively, in the marlin weight division.

The leaderboard was constantly changing throughout the tournament due to the hotly contested swordfish division. Every weighed sword easily shattered the existing Mississippi record of 75 pounds. By the time the scales closed Saturday night, Pay Dirt, a 37 Freeman based in Tallahassee, Florida, was the big winner. Angler Scott Cothran, Capt. Ryan Kelly and the veteran team boated a 242.54-pound broadbill to earn top tournament honors and a check for $51.075.

Their catch must now be verified by the Mississippi Department of Marine Resources, a process that should take a few weeks. If it is certified as expected, Pay Dirt will earn an additional payout of $325,000 plus a Petro Nissan Titan pick-up. Freeman Boatworks, Hilton’s Realtime Navigator, Killer Bee Bait, Poseidon Total Fishing Outfitters and Marsh Tacky Carbon were the special swordfish promotional sponsors, along with the MGCBC.

The tuna division was a seesaw battle all Saturday night as the record tournament fleet returned to the Point Cadet Marina in Biloxi. Fourteen-year-old Ryan Cooper on CE outlasted the top yellowfin, a rotund fish that tipped the scales at 201.06 pounds. It earned an $81,360 payout. Capt. George Crenshaw is the skipper of the 63 Hatteras based in Point Clear, Alabama. Another teenager, Drew Marshall, fishing aboard his family’s 105-foot Broward Trader’s Hill, whipped a tuna that scaled 185.29 pounds, worth $81,360. Capt. Billy Blount is the captain of Trader’s Hill, which home-ports in Bay Point, Florida. Still another junior angler, Dylan Doubleday, fishing aboard Makaira (53 Hatteras/Capt. BJ Teems), landed the third-biggest tuna of the tournament. That fish weighed 176.55 pounds, good for $17,490.

Angler Brian Leiser, Capt. Jeff Theiry and the Orange Beach, Alabama team aboard Hot, Black and Sticky (60 Hatteras) won the most money per pound by sweeping the dolphin division. With no other fish meeting the 20-pound minimum, Leiser and Company took home an impressive $108,000 for their 42.97-pound bull.

New all-time tournament records were set this year with 120 boats fishing and more than $2 million in prize money on the line. The 22nd annual MGCBC is slated for June 4-10 at the host Golden Nugget Casino and Hotel in Biloxi.