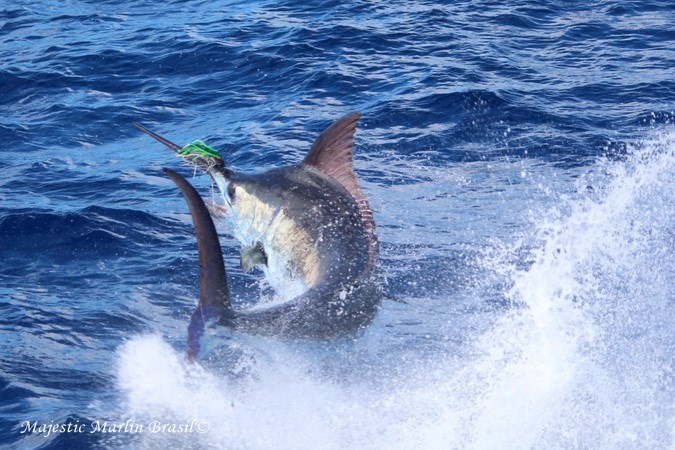 The Billfish Report is counting down its Top 10 Billfisheries of the Year, with #10 Brazil.. Criteria for our Top 10 include fish numbers, variety of billfish species, reports, average size of fish, length of season and number of boats fishing. With over 9,000 Billfish Reports submitted to us in 2017 from around the World, to even be considered for our Top 10 makes a fishery one of the best!

Brazil  –  This stretch of the Western Atlantic from Rio de Janeiro to Canavieiras has long been known to be some of the finest large Blue Marlin fishing in the World. Perhaps the most famous area of Vitoria, still holds the All Tackle Atlantic Blue Marlin record of 1,402 lbs. dating back to 1992. While not a stranger to the Top 10, we have not seen Brazil make it since 2012, so welcome back.

We will start with what they are known for. We saw a total of twenty-three (23) Blue Marlin caught in these waters over 500 lbs. This put them 6th Worldwide for 500+ Billfish caught in 2017.  While there were no Granders weighed here,  veteran Captain. Shawn Wallace on Camargue (Canavieiras) released a Blue Marlin he called over 1,000 lbs. Capt. Wallace had the hot hand, releasing two more Blue Marlin he called over 900 lbs. Further south, the largest fish reported to us was from Capt. Igor Assad on Zoom, who released a Blue Marlin they estimated at 850 lbs.

While these waters are known for large White Marlin (particularly down south) it is generally not a hot spot for Grand Slams. 2017 may change that impression however as we saw nine (9) Grand Slams get reported here, putting them 3rd Worldwide. Once again, Camargue lead the “fleet” with six (6) Grand Slams on the season.

Very few large marlin fisheries are known as numbers fisheries as well. This is true for most of Brazil as well, but we did have two (2) boats report 5+ Blue Marlin in a day. Perhaps the more surprising statistics came from some solid Sailfishing, with plenty of 5+ days reported, with the best day coming off the Antiqua with twelve (12).

If you had to say one negative thing about this fishery, it is the short season typically lasting less than three months. Despite the great fishing and size geographically this is a small fleet compared to other fisheries we cover. However, what they may lack in numbers, they make up for in size. A big thanks must go out to Capt. Antonio Amaral (Amaral Lures) who is without a doubt the Ambassador for this fishery.

Congratulations to Brazil our #10 Billfishery for 2017!