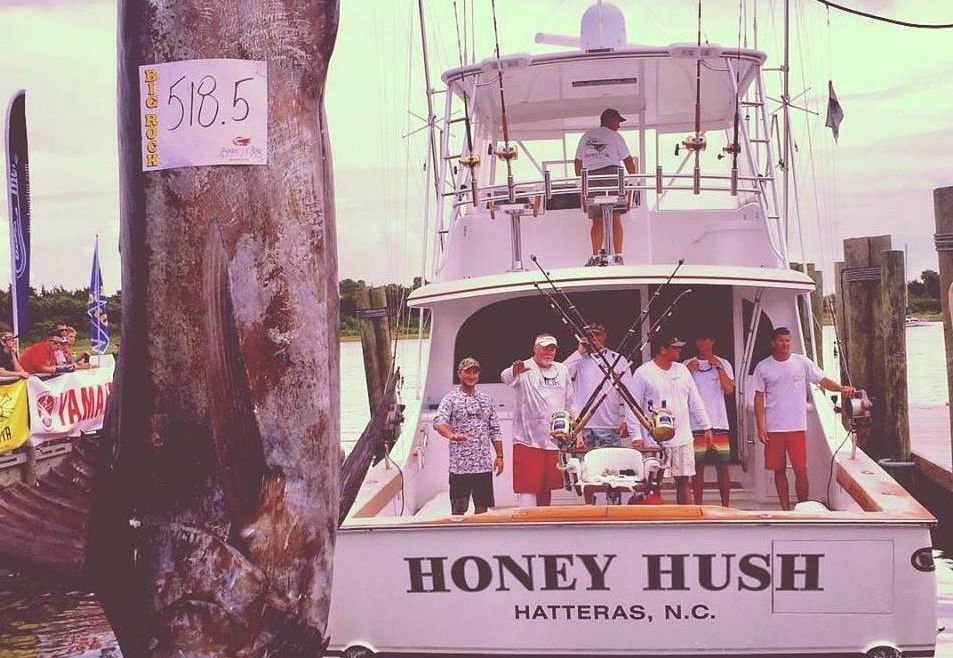 MOREHEAD CITY N.C. (Bruce Paul)– Craziness became commonplace at the 60th annual Big Rock Blue Marlin Tournament as a record seven blue marlin were weighed in Saturday to complicate the distribution of a record $2,560,925 purse during the competition’s final day.

In the end, Honey Hush, captained by Chuck Lindner, Morehead City, held on to take first place and win $753,875 with a 518.5-pound blue marlin reeled in by angler Robert Gorrell. Honey Hush grabbed the tournament lead Tuesday and managed to win by a very narrow margin. It was part of what made the contest so crazy.

The three fish that finished atop the blue marlin standings were separated by 17.6 pounds. The difference between first and second place was just 4.2 pounds. At one point third place was decided by a tenth of a pound.

That’s crazy … and it got crazier.

Carterican captain Lee Smith, Morehead City, brought a 500.9-pound blue marlin to the scales midway through the Saturday weigh-ins.  The catch, landed by angler Cole Ammons, Cedar Point, qualified – by less than a pound – for the Level V Fabulous Fishermen prize of $501,500.

But the Carterican team couldn’t celebrate.

Islander captain Bobby Schlegel, Greenville, had busted a propeller Friday and needed to borrow another boat to be able to finish the Big Rock. Schlegel borrowed Hatteras Fever and made the most of it.

Schlegel’s team released a blue marlin early Saturday and won $48,520 for scoring the most release points that day. Then they landed a 429.2-pound blue marlin that was good enough – at the time – for third place in the standings.

This may be the first time in Big Rock history that a borrowed boat helped an opposing team win this much prize money. It’s definitely the first time that a fishing team scored the most billfish release points on the same day that they weighed in a blue marlin heavy enough to make the leaderboard.

The craziest thing is this: The distribution of Big Rock’s record $2,560,925 purse looked somewhat set Saturday morning before lines went in the water. No blue marlins had been boated Wednesday or Thursday and the lone blue marlin catch Friday did not meet tournament minimums.

Then came 11 a.m. on the final day and a switch seemed to flip. Five blue marlins were boated in 44 minutes and two more were landed before the fishing day was through. Up to that point, only four blue marlins had been brought to the scales.

VooDoo Child, captained by Zack Adams, Morehead City, brought a 409.1-pound blue marlin to the weigh station Saturday that was reeled in by Steve Tingley, Youngsville. It moved into third place for 59 minutes but got bumped out of the standings when Carterican reached the scales. Two other Saturday blue marlin catches did not meet tournament minimums.

The final weigh-in of the 60th Big Rock put the standings in concrete. Fender Bender captain Carl Beale, Virginia Beach, brought a 514.3-pound blue marlin to the scales that was reeled in by Havelock angler Col. T.J. “Bucket” Dunne. Dunne’s catch missed winning the Big Rock by 4.2-pounds but it earned the team $262,450 for finishing in the runner-up spot.

Wallhanger, a boat captained by Gary Blount, Greenville, won $200,457 for the most release points (1,325) scored during the tournament. Wallhanger captured a daily and the overall release category with three blue marlins and one white marlin release.

Shenandoah, captained by Alan Willis, Morehead City, won a daily release prize and finished third in the release division to earn $109,295. Crews from Coverage, Double B and Release all won $48,520 in the daily release competitions.

Goombay, captained by Brian Peele, Salter Path, won the winner-take-all dolphin division with a 71.1-pounder pulled in by angler Jeff Ross. Goombay won $146,200 plus $7,000 in daily and other weekly prizes.

Sarcastic, captained by Jonathan Rose, Burlington, won the wahoo division with a 74.4 pounder caught by angler Gary Teer. The Sarcastic catch earned the team $7,000 in daily and weekly prizes.

Reel Country, captained by Mark Chambers, Morehead City, won the tuna division with a 19.9-pounder landed by Mark Ellington. The Reel Country catch earned the team $7,000 in daily and weekly prizes. It was the only tuna boated during the tournament.

Ironically Carterican, which had to bide its time until the Islander team weighed in its blue marlin, won the drawing for the sixth and final 60thBig Rock Rolex watch. At the time, the Carterican crew was busy celebrating its Level V victory. It’s a good bet they’ll be on time for the distribution of prizes set 7 p.m. Saturday at the Crystal Coast Civic Center.